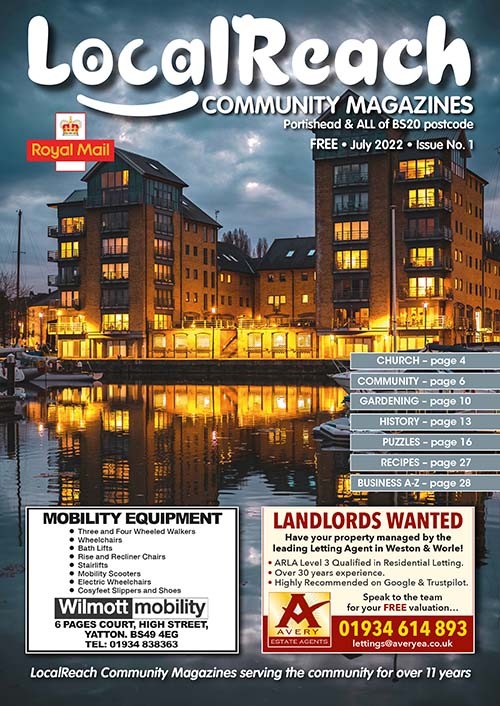 Portishead (/pɔːrtɪsˈhɛd/) is a coastal town on the Severn Estuary, 8 miles (12 km) to the west of Bristol, but within the unitary district of North Somerset, which falls within the ceremonial county of Somerset, England. It has a population of around 25,000,with a growth rate considerably in excess of surrounding towns.

Portishead has a long history as a fishing port. As a Royal Manor it expanded rapidly during the early 19th century around the docks, with supporting transport infrastructure. A power station and chemical works were added in the 20th century, but the dock and industrial facilities have since closed and been redeveloped into a marina and residential areas. Portishead was also the telephone control centre used by British Telecom (BT) for non-direct dialled calls to maritime vessels, a service known as Portishead Radio.

The town's population is expanding, and Portishead is now primarily a dormitory town for Bristol and its environs, although a range of service industries has grown up. The headquarters of both Avon and Somerset Constabulary and Avon Fire and Rescue Service are in Portishead.

The name Portishead derives from the "port at the head of the river". It has been called Portshead and Portschute at times in its history and Portesheve in the Domesday Book, and was locally known as Posset.

The town's recorded history dates back to Roman times, although there is also evidence of prehistoric settlement, including polished flint axe heads. There were also Iron Age settlements in the area, of which Cadbury Camp was the largest. Other sites that have been identified include a 1,200 by 600 feet (370 by 180 m) site that was successively occupied by the Romans, Britons and Danes. There is some evidence that it may have been the western end of the Wansdyke, an early medieval or possibly Roman boundary with a series of defensive linear earthworks extending to the Savernake Forest near Marlborough in Wiltshire.

After the Norman conquest the manor was held by the Bishop of Coutances and later reverted to the crown, after which William II gave it to a merchant from Bristol known as Harding and then to his son Robert Fitzharding who became Lord of Berkeley. The Berkeley family held it for generations until it passed by marriage to the Cokes of Holkham in Norfolk. In the 14th century it belonged to Everard le Frenshe. In 1621 the Bristol Corporation purchased large portions of land in Portishead and revived the Manor Court. The rights of the corporation over the manor was disputed but they held it until 1836 when they sold it for £8,050. The parish of Portishead was part of the Portbury Hundred.

The town was built on the mouth of a small tributary of the Severn Estuary near the mouth of the River Avon. The old pill or jetty provided protection for craft against the Bristol Channel's large tidal range, and iron rings can be seen in the high street at which fishing boats used to moor. Its position meant Portishead was used to guard the "King Road", as the waters around the headland are called. In 1497 it was the departure point for John Cabot on the Matthew. A fort was built on Battery Point, and was used during the English Civil War when the town supported the Royalists, but surrendered to Fairfax in 1645. Guns were also placed at Battery Point during World War II. The King Road was the site of a naval action in 1758 when HMS Antelope captured HMS Belliqueux, one of a French squadron returning from Quebec.