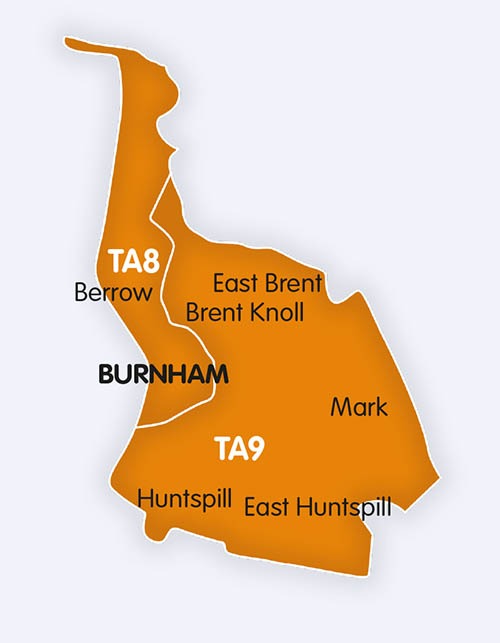 Burnham-on-Sea is a town in Somerset, England, at the mouth of the River Parrett and Bridgwater Bay. Burnham was a small fishing village until the late 18th century, when it began to grow because of its popularity as a seaside resort. It forms part of the parish of Burnham-on-Sea and Highbridge and shares a town council with its neighbouring market town of Highbridge. According to the 2011 census the population of the parish (i.e. including Highbridge) was 19,576,[1] of which the populations of the wards of Burnham Central and Burnham North, which made up most of the town, totalled 13,601.

The position of the town on the edge of the Somerset Levels and moors where they meet the Bristol Channel, has resulted in a history dominated by land reclamation and sea defences since Roman times. Burnham was seriously affected by the Bristol Channel floods of 1607, with the present curved concrete wall being completed in 1988. There have been many shipwrecks on the Gore Sands, which lie just offshore and can be exposed at low tides. Lighthouses are hence prominent landmarks in the town, with the original lighthouse known as the Round Tower built to replace the light on the top of the 14th century tower of St Andrews Church. The 110-foot (34-metre) pillar or High Lighthouse and the low wooden pile lighthouse or Lighthouse on legs on the beach were built to replace it. The town's first lifeboat was provided in 1836 by the Corporation of Bridgwater.

A stone pier was built in 1858 by the Somerset Central Railway. Soon afterwards, in 1860, a steamer service to Wales was inaugurated, but it was never a commercial success, and ended in 1888. Burnham-on-Sea railway station was the terminus of the Burnham branch of the Somerset and Dorset Joint Railway. It opened in 1858, closed to scheduled passenger traffic in 1951, and stopped being used for excursions in 1962. The former Great Western Railway station is now known as Highbridge and Burnham. A second pier, built of concrete between 1911 and 1914, is claimed to be the shortest pier in Britain.

Highbridge is a small market town situated on the edge of the Somerset Levels near the mouth of the River Brue. It is in the County of Somerset, and is approximately 20 miles (32.2 km) north west of Taunton, the county town of Somerset. Highbridge is in the District of Sedgemoor, being situated approximately 7 miles (11.3 km) north of Bridgwater, the district's administrative centre. Highbridge closely neighbours Burnham-on-Sea, forming part of the combined parish of Burnham-on-Sea and Highbridge and shares a town council with the resort town. In the 2001 census the population was 5,986. In the 2011 census the population of the town was included in the ward of Highbridge and Burnham Marine, which totalled 7,555.

Berrow is a village and civil parish in the Sedgemoor district of Somerset, England. According to the 2011 census it had a population of 1,534.

Brent Knoll is a 137-metre-high (449 ft) hill on the Somerset Levels, in Somerset, England. It is located roughly halfway between Weston-super-Mare and Bridgwater, 2.5 miles (4.0 km) from the Bristol Channel coast at Burnham-on-Sea. At the foot of the hill are two villages East Brent and Brent Knoll, which takes its name from the hill but was previously called South Brent. The hill's size and isolated position on the levels mean that it dominates the landscape and can be seen for many miles, and its prominence is emphasised to travellers because the Bristol to Taunton railway line, M5 motorway, A370 and A38 roads all pass within a mile or less from its base.