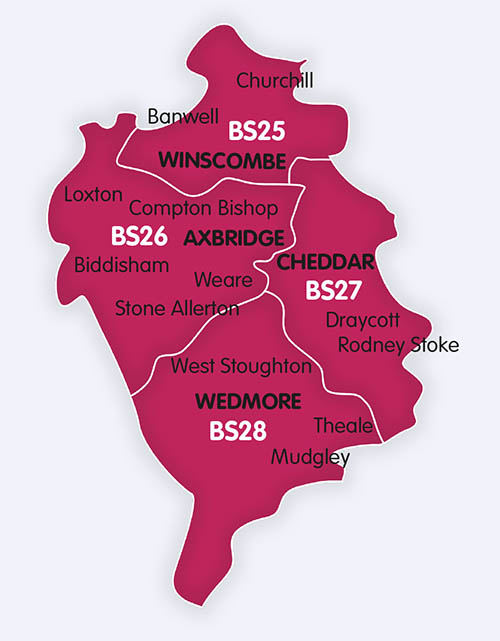 Wedmore is a village and civil parish in the county of Somerset, England. It is situated on raised ground, in the Somerset Levels between the River Axe and River Brue, often called the Isle of Wedmore. It forms part of Sedgemoor district. The parish consists of three main villages: Wedmore, Blackford and Theale, with the 20 hamlets of Ashton, Bagley, Blakeway, Chapel Allerton, Clewer, Crickham, Cocklake, Heath House, Latcham, Little Ireland, Middle Stoughton, Mudgley, Panborough, Sand, Stone Allerton, Stoughton Cross, Washbrook, West End, West Ham and West Stoughton. The parish of Wedmore has a population of 3,318 according to the 2011 census.

Its facilities include a medical and dental practice, pharmacy, butcher's, a village store with off licence, three pubs, restaurant, café and several other local shops. It is located 4 miles (6 km) south of Cheddar, 7 miles (11 km) west of the city of Wells and 7 miles (11 km) north west of Glastonbury.

Cheddar is a large village and civil parish in the Sedgemoor district of the English county of Somerset. It is situated on the southern edge of the Mendip Hills, 9 miles (14 km) north-west of Wells. The civil parish includes the hamlets of Nyland and Bradley Cross. The village, which has its own parish council, has a population of 5,755 and the parish has an acreage of 8,592 acres (3,477 ha) as of 1961.

Cheddar Gorge, on the northern edge of the village, is the largest gorge in the United Kingdom and includes several show caves, including Gough's Cave. The gorge has been a centre of human settlement since Neolithic times including a Saxon palace. It has a temperate climate and provides a unique geological and biological environment that has been recognised by the designation of several Sites of Special Scientific Interest. It is also the site of several limestone quarries. The village gave its name to Cheddar cheese and has been a centre for strawberry growing. The crop was formerly transported on the Cheddar Valley rail line, which closed in the late 1960s but is now a cycle path. The village is now a major tourist destination with several cultural and community facilities, including the Cheddar Show Caves Museum.

The village supports a variety of community groups including religious, sporting and cultural organisations. Several of these are based on the site of The Kings of Wessex Academy, which is the largest educational establishment.

Axbridge is a small town in Somerset, England, situated in the Sedgemoor district on the River Axe, near the southern edge of the Mendip Hills. The town's population according to the 2011 census was 2,057. Axanbrycg is suggested as the source of the name, meaning a bridge over the River Axe, in the early 9th century.

Early inhabitants of the area almost certainly include the Romans (who are known to have mined lead on the top of the Mendips) and earlier still, prehistoric man, (who lived in the local caves) whose flint tools have been found on the slopes of the local hills. The history of Axbridge can be traced back to the reign of King Alfred when it was part of the Saxons' defence system for Wessex against the Vikings. In the Burghal Hidage, a list of burbs compiled in 910 it was listed as Axanbrycg. A listing of Axbridge appears in the Domesday survey of 1086 as Alse Bruge, meaning 'axe bridge' from the Old English isca and brycg. It was part of the royal manor of Cheddar and part of the Winterstoke Hundred.

Winscombe is a village in North Somerset, England, close to the settlements of Axbridge and Cheddar, on the western edge of the Mendip Hills, 7 miles (11 km) southeast of Weston-super-Mare and 14 miles (23 km) southwest of Bristol. The Parish of Winscombe and Sandford, centred on the Parish Church of Church of St James the Great, includes the villages/hamlets of Barton, Hale, Oakridge, Nye, Sidcot and Woodborough.

Historically part of Somerset, Winscombe has a few shops and businesses focused in the centre of the village, along Woodborough Road and Sandford Road. There is a doctor's surgery in the village, and two dentists.

West of the village is the Max Bog biological Site of Special Scientific Interest.