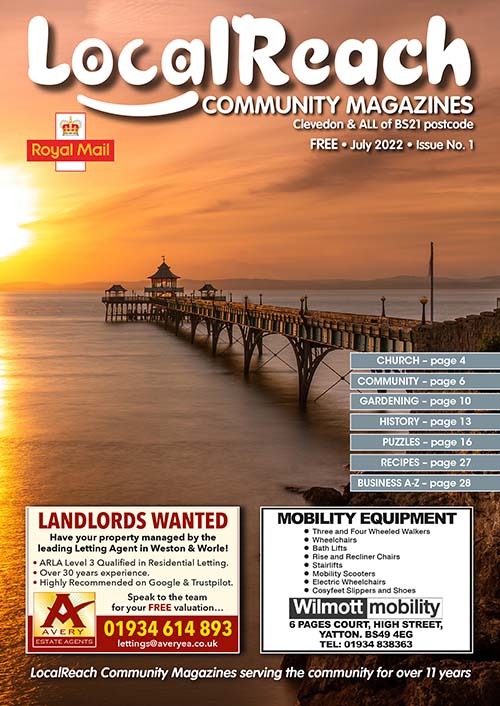 Clevedon (/ˈkliːvdən/, KLEEV-dən) is an English seaside town and civil parish in the unitary authority of North Somerset, part of the ceremonial county of Somerset. It recorded a parish population of 21,281 in the United Kingdom Census 2011, estimated at 21,442 in 2019. It lies along the Severn Estuary, among small hills that include Church Hill, Wain's Hill (topped by the remains of an Iron Age hill fort), Dial Hill, Strawberry Hill, Castle Hill, Hangstone Hill and Court Hill, a Site of Special Scientific Interest with overlaid Pleistocene deposits. It features in the Domesday Book of 1086. Clevedon grew in the Victorian period as a seaside resort and in the 20th century as a dormitory town for Bristol.

The name derives from the Old English, cleve meaning "cleave" or "cleft" and don meaning "hill".

Wain's Hill is an univallate Iron Age hill fort situated approximately 1 mile (1.6 km) south-west of Clevedon. The hill fort is defined by a steep, natural slope from the south and north with two ramparts to the east.

The 1086 Domesday Book mentions Clevedon as a holding of a tenant-in-chief by the name of Mathew of Mortaigne, with eight villagers and ten smallholders. The parish of Clevedon formed part of the Portbury Hundred.

Two small rivers, the Land Yeo and Middle Yeo, supported at least two mills. The Tuck Mills lay in the fields south of Clevedon Court and were used for fulling cloth. Other mills near Wain's Hill probably date from the early 17th century.

Victorian Clevedon changed from a farming village into a popular seaside town. The Victorian craze for sea bathing was met in the late 19th century by saltwater baths next to the pier (since demolished, though foundations remain), and bathing machines on the main beach. Clevedon was the site of St Edith's Children's Home for almost 100 years until it closed in 1974. It was run by nuns of the Community of the Sisters of the Church, an international body in the Anglican Communion living according to the Gospel values of poverty, chastity and obedience. The building on Dial Hill is listed so that the outside has changed little, but now contains private flats.

Clevedon was served by a branch line from Yatton opened in 1847, six years after the main line, but closed in 1966. The station site is now Queen's Square, a shopping precinct.  The town was headquarters also for the Weston, Clevedon and Portishead Light Railway, which connected the three named coastal towns. It opened to Weston-super-Mare in 1897, was extended to Portishead ten years later, but closed in 1940. Its trains crossed the road in the town centre, known as The Triangle, preceded by a man with red and green flags.

The first large-scale production of penicillin took place in the town. In 1938 Howard Florey was working at Lincoln College, Oxford University with Ernst Boris Chain and Norman Heatley when he read Alexander Fleming's paper on the antibacterial effects of Penicillium notatum mould. He arranged for this to be grown in deep culture tanks at the Medical Research Council's Antibiotic Research Station in Clevedon, enabling mass production of the mould for a medicine injected into forthcoming World War II soldiers suffering from infections.